January 17, 2017
There are so many destinations I want to travel to, so most of them I know I'll only see once. Some destinations, however, make it to my repeat list. Las Vegas is one of those. I love Vegas! 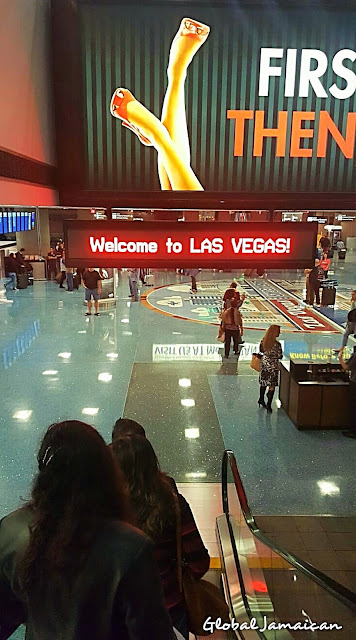 One of the best things about Vegas is that it caters to everyone. Families, couples, singles, friends, children, adults and seniors...Vegas has something for you. I've talked to people who have visited Vegas and loved it, while experiencing it a whole different way from myself.

I'll be talking specifically about places on Las Vegas Blvd., otherwise known as "the Strip." This is where you'll find most of the casinos, hotels, attractions and restaurants. You don't have to go anywhere else; it's so easy. 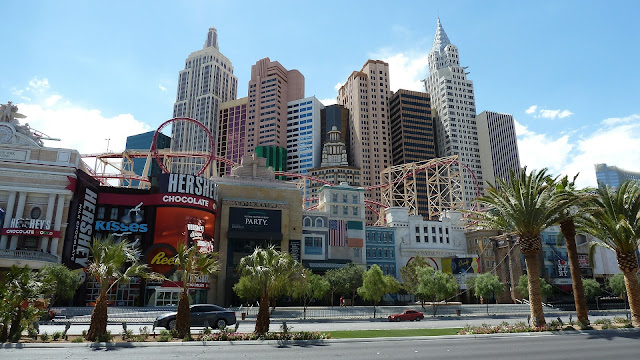 These are a few of my personal picks.

This is of course what Las Vegas is most popular for. Casinos are everywhere! It's a gamblers paradise. 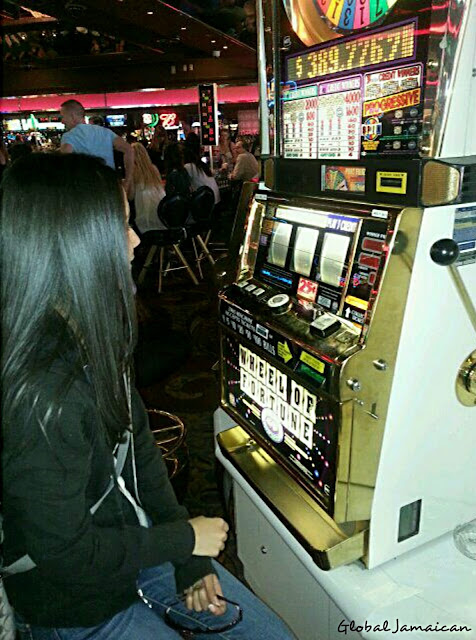 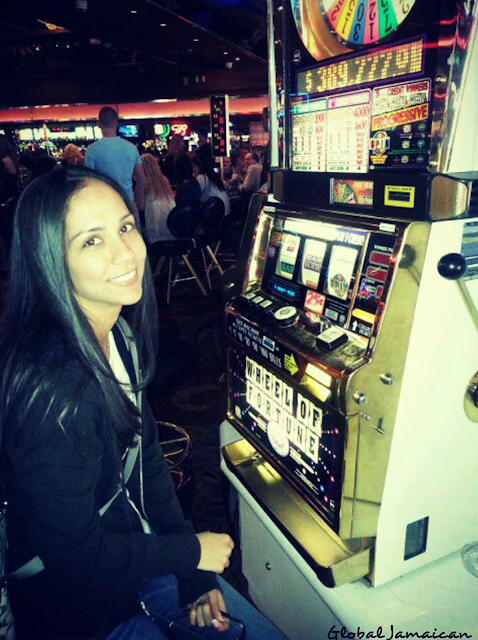 You cannot avoid walking by a slot machine, so it's worth a mention. Yet, it's the thing I partake in the least while visiting Vegas. It's hard to not feel the urge to slip a coin into a machine, especially with the sounds of the jackpots and the spinning wheels. So every now and again, I will do that while passing by one. Who knows, you may get lucky.

One thing that I love about the Las Vegas Blvd. or "the Strip" is that each hotel is an attraction. You could quite easily spend days just walking through each resort and seeing the attractions within. One of my favorites is The Grand Canal Shoppes, located in The Venetian Hotel & Casino and The Palazzo. These 2 properties are five-diamond luxury hotels that operate as one. 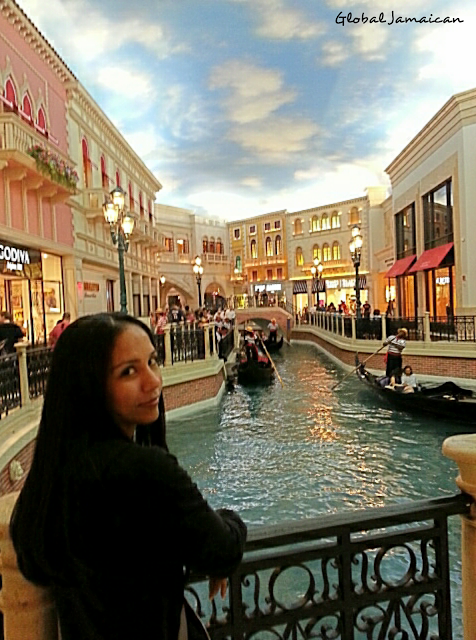 The mall features upscale stores and world-class restaurants. It was designed to resemble Venice, with cobblestone walkways and a sky ceiling that makes you feel like you're outside. It's most authentic feature is the Grand Canal, found within a replica of the famous St. Mark's Square, complete with gondola rides and singing gondoliers. See pricing and hours here.

Also on the Strip, you'll find another five-diamond luxury hotel and casino, The Bellagio. I'd like to mention three places to visit throughout it's complex.

One of the top free attractions in Vegas is found at the Bellagio's lake, which spans 8 acres. 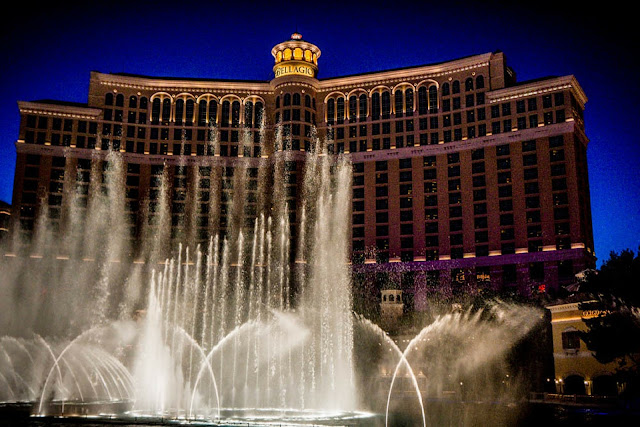 Everyday, the Bellagio puts on a fountain show which is synchronized to music. The show can be seen from multiple places on the Strip, at multiple times throughout the day and night. See dates and times here. Want a more exclusive view? The Bellagio offers rooms and suites with a view of the fountain and multiple restaurants with an awesome vantage point.

Next to the lobby of the Bellagio, you'll find the Conservatory & Botanical Garden. 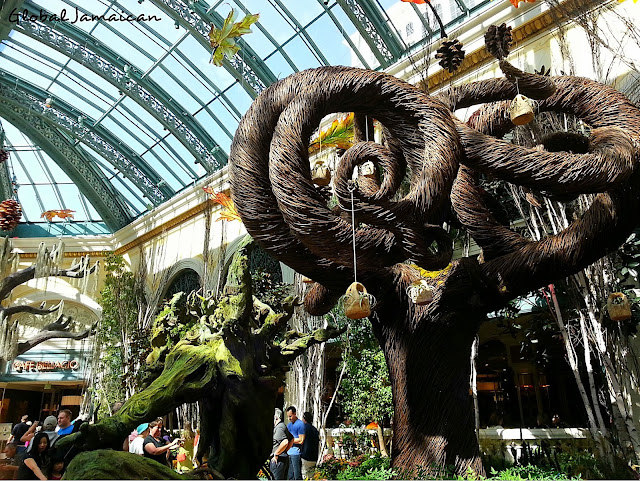 The Garden spans 14,000 square feet and has multiple seasonal themes. My most recent visit was in November, so the picture above features the Harvest Show. It's really beautiful and definitely worth walking through; especially because it leads to my next pick.

After you tour the Conservatory & Botanical Garden, you'll find walkways that lead to many things, including the Jean Philippe Patisserie. 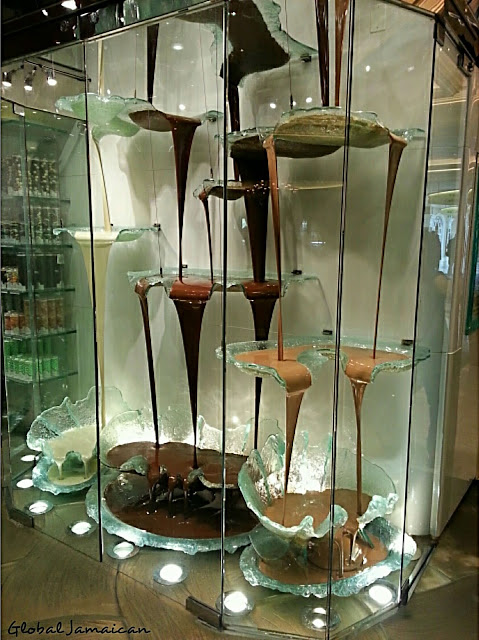 This is home to the world's largest chocolate fountain. There's a whole other upper section to it that I didn't capture in the photo.  Next to the fountain is the pastry shop, where you can purchase chocolates, candies, pastries and more. A second shop can be found in the Aria Resort & Casino.

No matter what kind of entertainment you're into, you'll find it in Las Vegas. Vegas is known for it's broad variety of daily and nightly shows that take places throughout the strip. So far I've attended: 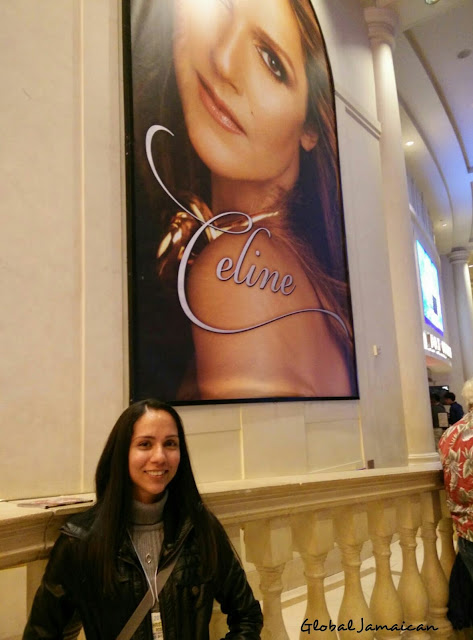 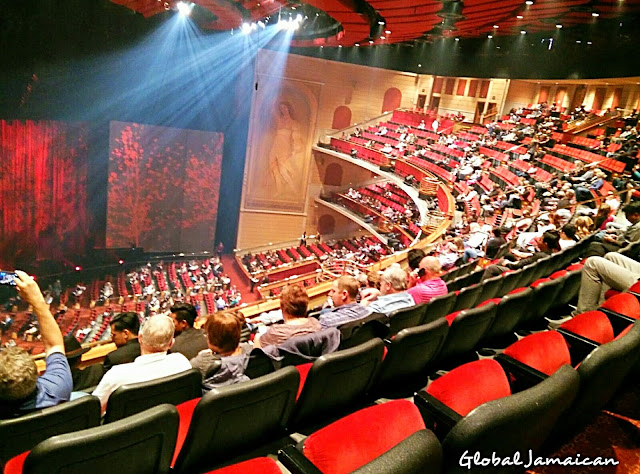 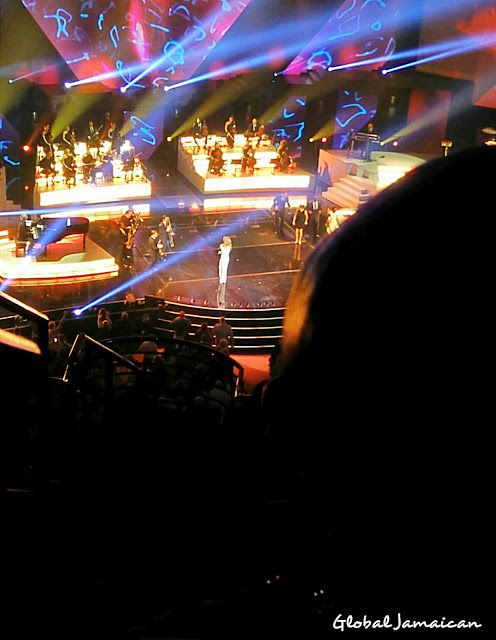 Celine's show was everything I hoped for and more. It was obvious why it get's such good ratings, even by people who weren't originally fans of her music. I watched in awe, thinking how is it possible that she sounds even better in person than on the CDs? Yes I still use CDs and I have all of hers. Celine put on such an entertaining show that I would definitely see it again.

Take a walk down the Linq Promenade and at the end you'll find the High Roller. You can't miss it; it's the tallest observation wheel in the world. However, there are two wheels currently in construction that are projected to surpass it; the New York Wheel and the Ain Dubai. 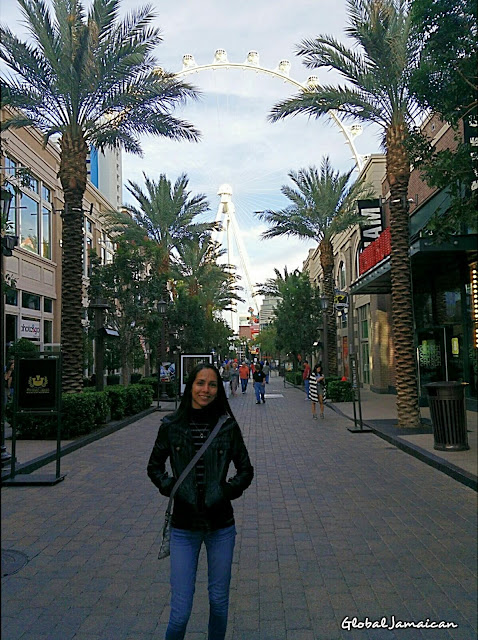 At 550 ft. high, it takes about a half an hour to complete the ride. There are 28 glass pods with a capacity of 40 people in each. 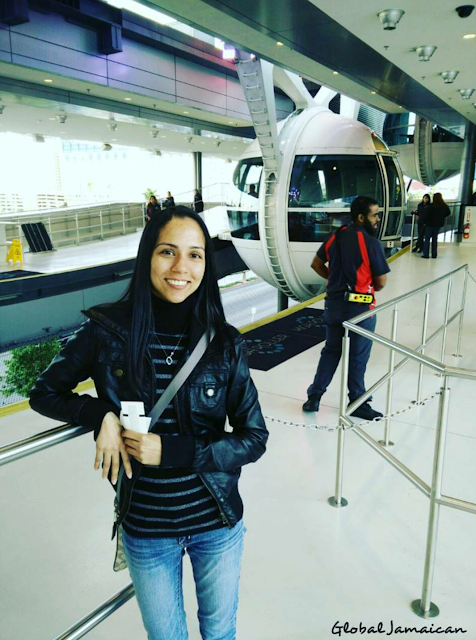 I went during the daytime and luckily it wasn't busy, so they gave me my own pod. The High Roller opens at 11:30 a.m to 2 a.m everyday. I was able to purchase discounted tickets from Tix 4 Tonight that morning. 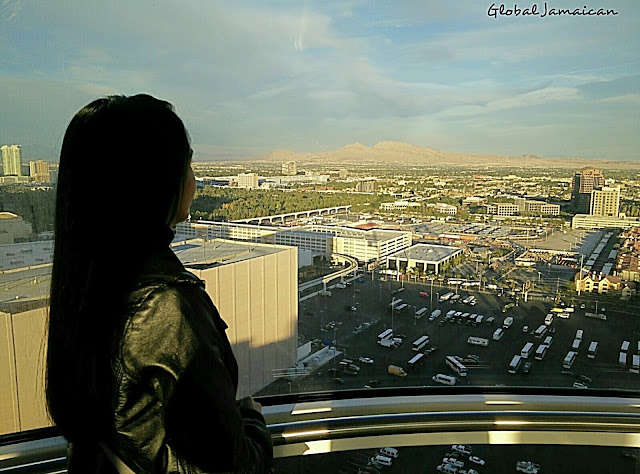 Such a nice view! You can see the Strip and the surrounding mountains.

There are so many restaurants on the strip, that it's hard to choose. Here are a few of my recommendations: 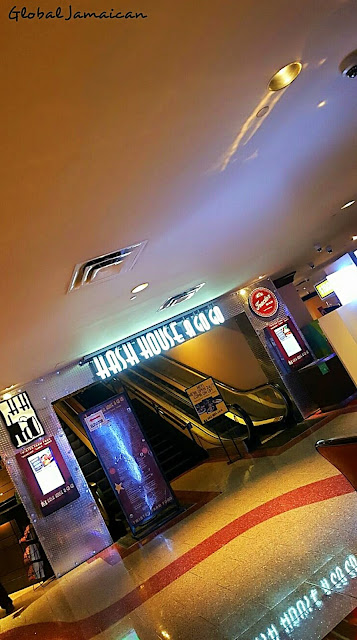 You'll find it in the Linq Hotel & Casino. The plates are huge, the food is very good, and the drinks are fun. 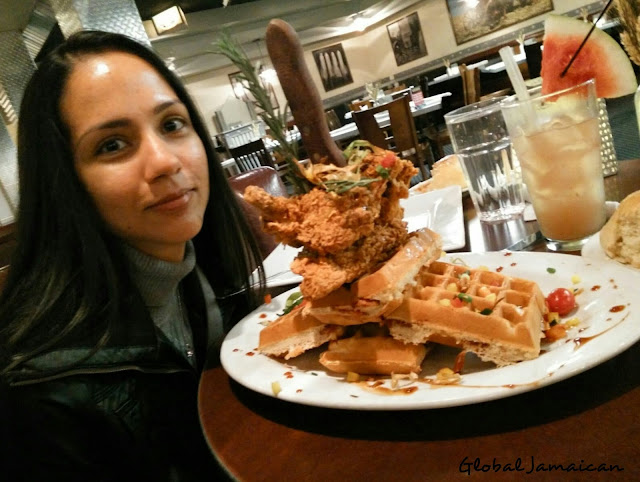 My recommendation: The friend chicken and waffles - so good! 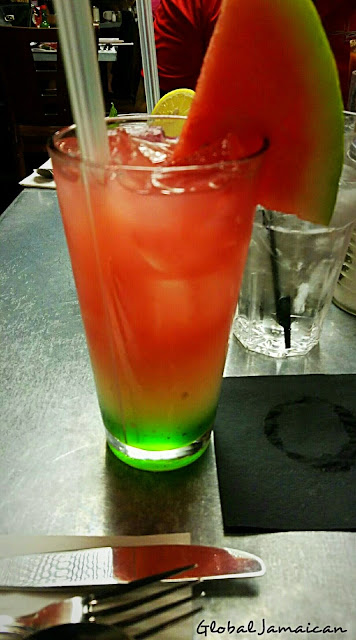 These were just a few of my personal picks. There's so much to do and see, that this just scratches the surface. 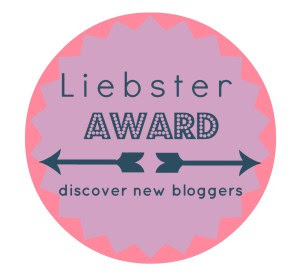 What a Nice Surprise - A Liebster Award!

First blog of 2017 - My First Liebster Nomination! Nominated by Aisha When I received the message from Aisha asking if I would be interested in accepting the Liebster nomination, I was surprised and elated. My blog had just entered into it's third month and I didn't expect this. I had been following Aisha's blog  Island Girl In-Transit  and being a fellow island girl, she stood out to me from the beginning. She's currently exploring her neighboring islands of the Caribbean, and posting interesting articles and tantalizing photos along the way. Check them out on her  blog , as well as her  Facebook  and  Instagram  pages. Aisha, I'm looking forward to seeing where 2017 will take you and wish you all the best. Cheers to the Caribbean and cheers to traveling! Have you heard of the Liebster Award? I didn't know about it prior to me starting my blog. I first heard the name in a travel group I joined. So I looked it up and thought it was a pr

Must Do and Eat in Montego Bay (Mobay)

Aahhh Jamaica...sweet sweet Jamaica! Are you ready to visit Mobay after reading my " Quick, Affordable, Weekend Getaway - Jamaica " post? Take a trip and come see for yourself why I'm so in love with my home country. Get ready for a trip to remember and for your taste buds to have a party with the Jamaican cuisine. Take a dip at Doctor's Cave Beach Have you ever been in water so clear that you can see tiny fishes swimming at your feet? By en:User:Op. Deo - http://en.wikipedia.org/wiki/Image:Doctors-Cave-Beach.jpg, Public Domain, https://commons.wikimedia.org/w/index.php?curid=974217 A visit to Mobay is not complete without a day at Doctor's Cave. It is said that the water has healing powers and was made famous after Sir Herbert Barker, a British Osteopath, visited in the 1920's and later wrote an article about it.  The beach is located on Mobay's "Hip Strip", which I'll get to next, and within 5 minutes from the